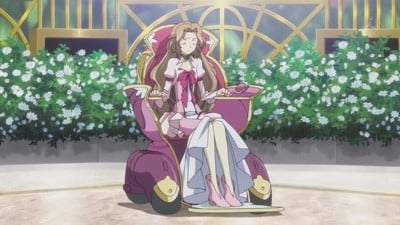 Surprise Attack over the Pacific

Rolo uses his Geass to buy Lelouch time to say words of caution to Nunnally without revealing his reawakened memories to Suzaku. Unwilling to fight against Nunnally, Lelouch orders the Black Knights to capture her as she is transported to Area 11 by airship. Successfully boarding the vessel, Zero meets with her and tries to convince that Britannia is using her. Nunnally reveals she volunteered for the position, and states she wishes to continue Euphemia’s Specially Administrated Zone of Japan, requesting a bewildered Zero to join her. Britannian reinforcements hinder the Black Knights’ assault, and as the airship crashes into the sea, Suzaku manages to save Nunnally, taking her away from Lelouch a second time.