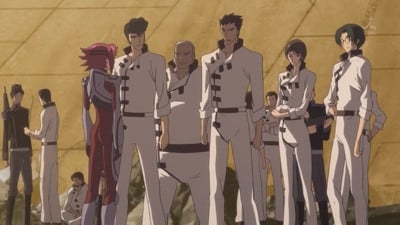 Counterattack at the Gallows

Lelouch deduces the nature of Rolo’s Geass and convinces Rolo to spare him; in return, he will hand over C.C. Li Xingke confronts the Eunuch Gao Hai and kills him to take command of the consulate. As the deadline approaches, Guilford prepares to execute the captured Black Knights, until Zero appears, challenging him to a duel. Using the same strategy from the Black Rebellion, he collapses the portion of the settlement they are standing on, causing confusion amongst the Britannian military as they are dumped into Chinese territory. While Kallen and the Black Knights rescue the prisoners, Rolo appears in the Vincent to kill Lelouch for his betrayal. However, Lelouch takes a bullet meant for Rolo, giving the youth pause. Lelouch plays on his insecurities about his future and sibling relationship, convincing him to join his cause.