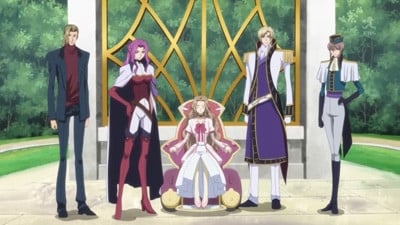 Lelouch begins his reformation of Britannia, abolishing the aristocracy and Area system. The Knights of Rounds attempt to remove Lelouch from power, but Suzaku, piloting the Lancelot Albion, easily obliterates their ranks, killing Bismarck Waldstein and two other Rounds members while only disabling Gino’s Knightmare. His position secure, Lelouch announces his intention to join the U.F.N. On the way to the meeting, he and Kallen bid each other farewell after she kisses him, Kallen having been unable to get Lelouch to answer any of her questions. When the UFN demands that he accept a limit to his voting power to prevent Britannia from attaining an automatic majority, Lelouch forces their hand by having Suzaku take the U.F.N. leaders hostage and Britannia’s military surround Japan. During the commotion, the Britannian capital is obliterated by Schenizel, who is aboard his new flying fortress, the Damocles. He reveals to Lelouch that Nunnally is alive, and she declares herself to be Lelouch and Suzaku’s enemy.