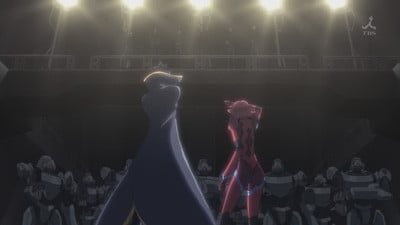 A ceasefire is called so Schneizel can meet with the leaders of the Black Knights, but Lelouch is too devastated to attend. Schenizel reveals the truth about Lelouch and his Geass, as well as the many people he has used it on; a recording from Lelouch’s meeting with Suzaku solidifies the evidence. In exchange for Japan’s independence, the Black Knights agree to betray Lelouch. Unable to escape, Lelouch tells Kallen he was using her all along to keep her from sharing his fate, but whispers that she should live on within earshot. Lelouch is prepared to accept death, until Rolo, piloting the Shinkirō, rescues Lelouch and escapes the combined forces of the Black Knights and the Britannians. However, the excessive use of his Geass required to do so overtaxes his heart and dies after flying Lelouch to safety. Lelouch resolves to not waste the life given to him by Rolo, declaring he will kill the Emperor by his own hand.