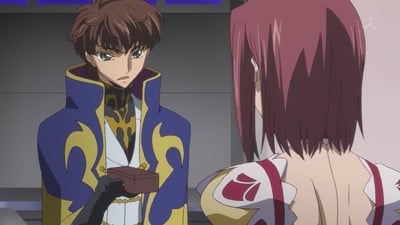 Rolo admits to causing Shirley’s death; rather than blame Rolo, Lelouch blames the existence of Geass itself. In retaliation, he mounts an assault on the Geass Directorate, slaughtering every man, woman, and child within the stronghold. V.V. pilots the Siegfried in an effort to stop the Black Knights, but is defeated by both Lelouch and Cornelia. He escapes to the Thought Elevator, where Charles awaits, and when Lelouch follows he is transported to the Sword of Akasha. Meanwhile, Kallen and Nunnally discuss Lelouch. They are interupted by Suzaku, who, despite having been told that Shirley’s death was a suicide, decides to interrogate Kallen using Refrain, in order to confirm his suspicion that Lelouch has become Zero again.