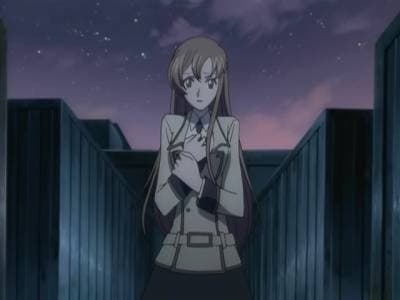 Kallen and Lelouch separately reflect upon the deaths of innocents in the Narita campaign. Shirley secretly follows Lelouch and witnesses the battle between the Japan Liberation Front and the Britannian Army, which Lelouch ends by detonating the Japan Liberation Front freighter as the Britannian Knightmares begin to board it, killing all personnel on board and giving the Black Knights the element of surprise. Suzaku attacks Lelouch, easily overpowering his weaker Burai with the Lancelot, forcing him to eject. He crash-lands near Shirley and is knocked unconscious. Shirley prepares to kill him to avenge her father, but hesitates when his mask falls off, revealing to her that Zero is Lelouch.